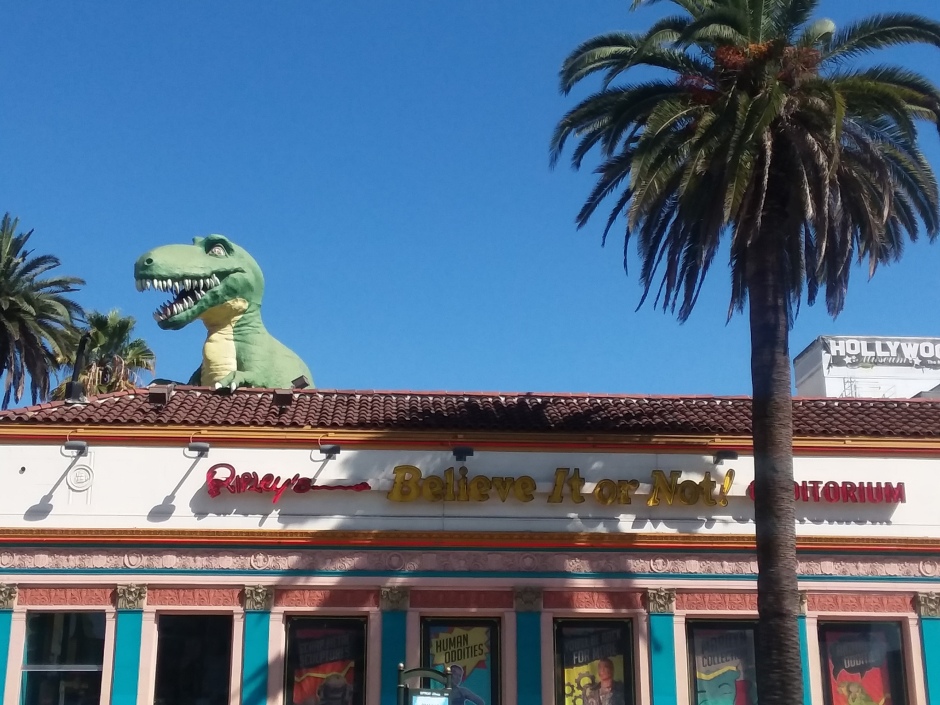 Believe it or not, my son and I saw a two-headed calf and some shrunken heads on Hollywood Boulevard!  While odd things aren’t that unusual to see in Hollywood, you can find them all under one roof at Ripley’s ‘Believe It, Or Not!’ museum.

The Ripley’s ‘Believe It or Not!’ odditorium is one of the main attractions along tourist-friendly Hollywood Boulevard.  You can’t miss it—it’s the building with the green t-rex head poking through the roof on the corner of Hollywood and Highland.  The museum hosts an array of unique artifacts and strange tales collected from around the world by journalist/writer/cartoonist Robert L. Ripley.

Upon entering, my 8 year-old and I were greeted in the lobby by none other than President Donald J. Trump– or rather a wax figure of the former T.V. icon.  I am not exactly sure what Donald Trump’s connection is to Ripley’s other than “Believe it or not, he is our president,” but it does make for a fun photo-op, and it sets the tone for what you’ll find inside.

Once through the turnstile, my son and I were off on a self-guided adventure.  I was immediately blown away standing beside a life-sized replica of Robert Wadlow, the tallest man who ever lived (8’ 11”). The model is proportional to what the “Alton Giant” looked like in real life.  Holy cow, he’s big!

Some of the other incredible items include a cyclops goat, that two-headed calf I mentioned earlier,  a toilet paper dress, and much more.  The Hollywood Ripley’s also features a host of pop-culture memorabilia including a room dedicated to Marilyn Monroe.  There are also a lot of interactive exhibits, games and puzzles, which we really enjoyed. Bring some quarters for the shooting gallery.  And look for a box with a mystery inside—open at your own risk!

There are over 300 artifacts on two floors to discover.  The facility has an elevator if you need help getting around, but one of the highlights was a set of stairs where the steps play notes when you like piano keys.

As with all good things in Los Angeles, be prepared to deal with parking challenges. There is no dedicated parking lot at the museum so you have to utilize one of the lots nearby, which are a few blocks away, and might make for a longish walk for a little one.  We parked across the street from the museum at the Hollywood and Highland complex, which sports a few popular stores and eateries as well as access to theaters, including the Mann’s Chinese.  If you park beneath the Hollywood and Highland complex, however, be sure to get your ticket validated at one of the stores on site or the movie theater, otherwise you’ll pay a hefty fee to bail your car out—Ripley’s does not validate. An even better idea is to ride the Metro red line, which has a stop directly under Hollywood and Highland, and Ripley’s is just across the street!

The museum is open daily from 10am to Midnight.  You can purchase tickets on-line, but walk-ins are more than welcome.

Believe me when I tell you that the Ripley’s ‘Believe It or Not’ odditorium is a great LITTLE ADVENTURE in Los Angeles that you and your child will keep talking about long after your visit.

Hours:Open 364 days a year (not open the night of the Academy Awards ceremony); 10am – Midnight.

Good for: 7+.  Some of the exhibits might be a little intense for real little ones.

Watch out for:Traffic.  The corner of Hollywood and Highland is a very busy intersection.